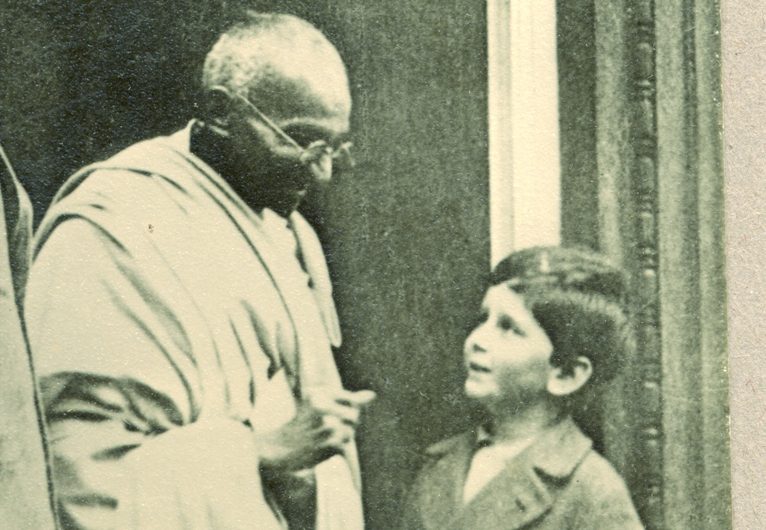 On 18 October 1931 Mahatma Gandhi arrived at Woodbrooke as part of his tour of Britain.  Ghandi spoke to a packed Cadbury Room, rumoured to contain over 300 people, on the subject of obtaining Indian freedom through peaceful means.

Eighty eight years to the day, a blue plaque will be unveiled at Woodbrooke by the Mayor of the West Midlands to mark 150 years since Gandhi’s birth.

The plaque ceremony will be held in the same Cadbury Room that Ghandi spoke in,  and will be attended by the High Commissioner of India, West Midlands Mayor Andy Street,  Lord Jitesh Gadhia, Rita McLean of the Birmingham Civic Society, and Woodbrooke Director Sandra Berry.

“Many Quakers in Gandhi’s lifetime took inspiration from his non-violent campaigning for a better world. As a Quaker learning provider, Woodbrooke today is committed to  offering learning opportunities that support individuals and communities in the exploration, deepening and application of their spiritual gifts.”

When Gandhi travelled to Woodbrooke in 1931 it was in part as tribute to his friend Horace Alexander, who taught international relations at Woodbrooke from 1919 to 1944.  Reflecting later in life about his relationship with Gandhi, Horace said:

“…there was a good deal of the Quaker about him: the kind of Quaker my own father was – more concerned to try and live a life of service than in theological speculation. Then, of course, his insistence on total pacifism: or non-violence, as he preferred to call it.”

The links between Gandhi and Woodbrooke have sparked interested throughout the years and on 2 October 2019 Woodbrooke hosted the launch of Jai Jagat 2020 UK, as part of the world wide Jai Jagat 2020 Global March for Justice and Peace inspired by Gandhi.

Woodbrooke is excited to have been given a blue plaque to commemorate the historic event of Gandhi’s visit, and hopes it will raise broader awareness about Gandhi’s trip to Birmingham and his values that continue to inspire.

The plaque has been sponsored by the Indian Consulate, Birmingham.

The event has been sponsored by Edwards Insurance Brokers.