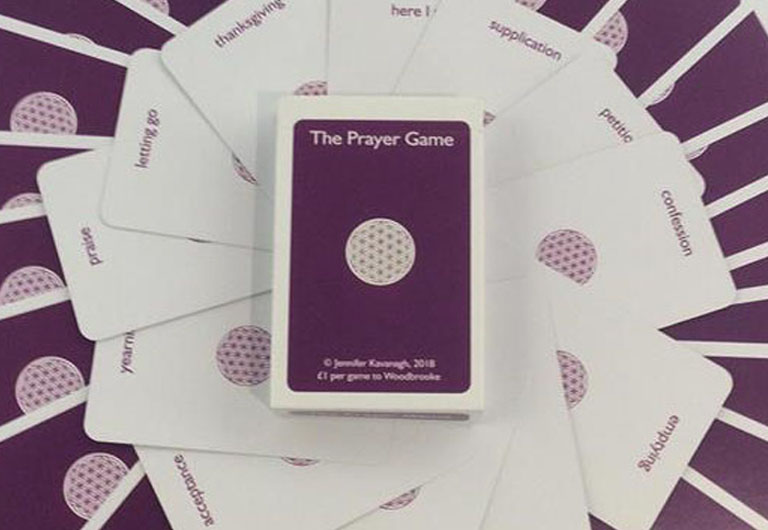 Quaker author and Woodbrooke associate tutor, Jennifer Kavanagh, didn’t expect to be making games but now having created Journey Home and The Prayer Game she shares their origins and impact.

A few years ago a friend of mine came to his first ever Quaker Meeting. Salim is an Indian actor, a Sufi, a Reiki master. I was nervous in case the ministry didn’t speak to him. But he came out, having loved the silence, and feeling that the ministry had flowed organically from it. “But”, he said, “you’re all so incredibly serious. What you need is a Quaker mirthquake.”

Spiritual life doesn’t need to be solemn. Laughter can build community and open up the heart space. And games don’t have to be frivolous, violent or self-seeking. Somewhere in the middle are entertaining games of serious intent.

The spirit behind the games

Although I’ve always enjoyed playing games, it never occurred to me that I would create any! The book Journey Home, came out of my anger at homelessness in this country, and from asking people – homeless people, refugees and random people at parties or on a train – “What is home to you?”. The book was born and shaped from those conversations and some months later I woke up one morning and thought, “That would make a boardgame.” Where do these thoughts come from?

The inception of The Prayer Game was different. I was planning a workshop on “Unknowing” at Glenthorne. Pondering the idea of a session on “prayer” (not an easy concept for me!), I remembered seeing at Woodbrooke a handout about something called “Worship rummy”. I thought, “I could do that with prayer.” I bought some coloured card and had a glorious evening writing 52 words and phrases that might be thought to represent prayer. The result was a game where players exchange cards until they each end up with four cards that speak to them of prayer.

The game went really well, and one of the participants said, “You should produce this.” When we all went through to the sitting room for tea, I happened to pick up a pack of cards that was lying around. I found that it had been produced by Cartamundi, who had produced Journey Home and I thought, all right, all right, I’ll do it. I asked Woodbrooke if they minded, and now give £1 per game to them in recognition of that initial prompt.

In both cases, in different ways, Spirit.

The intention of Journey Home was to raise consciousness about the complex reality of “home” – to be an antidote to Monopoly and its focus on money and investment; to raise money for homeless people (half the profits go to The Big Issue Foundation); and to have fun. I hope it has fulfilled all those functions – as it’s played by families and friends, at awaydays, in day centres, residential homes, and with refugees, all over the place.

The aim of the game is to “go home”, which is achieved, as you move through events in the different stages of life, by accumulating counters representing the different strands of “home”. You need to get a total of 20 counters with at least 3 of each colour. Each player acquires characteristics and is asked to make decisions, with the other players discussing what that decision merits in terms of gaining or losing counters. It’s a game based on discussion and consensus.

One session of playing it as part of a mini-festival at Hackney Museum was remarkable.

Four of us played: a young woman who joined us later on, and two men, a younger man, a Jamaican, whom I’ll call A, and O, a quieter older friend, an Eritrean with not much English. A was enthusiastic, competitive, and in the game had an eventful and positive journey. I had a pretty rotten one – being frightened of being alone, my business failing and my house compulsorily purchased. But A, who was “the youngest of six” and I were, in terms of the game, “family” and when I was trying to make a decision about what to do about my house, I said, “Oh, I come from a big family, maybe they can help.” Whereupon A said, “Yes, I’m your bro; you can stay with me. You will have somewhere to live.”

A was nearly “home”, only lacking one silver shelter counter to get there, and he was pretty fed up when O managed to go home first. But the rules say that if you have extras when you go home, you can give them to someone else to help them go home too. O had 21 counters, and the extra one was shelter – so he pushed it across the table to A and enabled him to go home too. They were the only two to go home before we stopped the game.

It was only after we’d finished that I asked O where he lived, and learned that both men were homeless, moving from one church shelter to another. That was where they had met.

The intention of The Prayer Game was to reach out to those who have such differing ideas of prayer. One group of Quakers sat down to play it – all saying, “I don’t do prayer” – and by the end they found that in some unexpected way they did.

As Trish put it;

“It was such a great way to get a sense of where everyone was coming from – and also I think very helpful for us to hear ourselves saying aloud why certain words spoke to us, and why certain others not. More often we have a silent internal conversation, so it was a very good way of opening out.”

The game  leads to some deep sharing, but also to surprise as when one player threw away “Discipline” and another said, “That’s just what I want”, and the shock when someone threw away “Love”. What?!

I hoped and expected that it would speak to those of different denominations, as in the original workshop. What I had not expected was that it would appeal to and work for people of different faiths. So much less unwieldly than a boardgame, I can just pop it in a little jiffy, stick on a stamp and send it off all over the world: to Episcopalian ministers in Ohio, to the “vicarage” all over the UK, and multiple copies to Quaker meetings. The numbers sold are far greater than I’d imagined. After a year, we are already on our third set of 250. Also unexpected for most people playing it is how deep it goes. Its very simplicity enables players to talk about things they rarely reveal.

I often think about Salim’s mirthquake. In Journey Home as players build up a character and make decisions about random life events, there’s plenty of mirth – as when a vicar picked up “I am religious”! In both my games I’ve found opportunities for laughter and opening up in a way that can be all too rare.

I love writing, running workshops and creating these games. Most of all, I love knowing that I do not know what will come next, what I will be led to do. The place of unknowing in my life. “Walking with a smile into the dark”.

Jennifer Kavanagh is a retreat leader and writer on the Spirit-led life:
www.jenniferkavanagh.co.uk

This blog is part of a series on Quakers and games. Also see:
Bringing social justice to life – Games and Quakerism by Jessica Metheringham