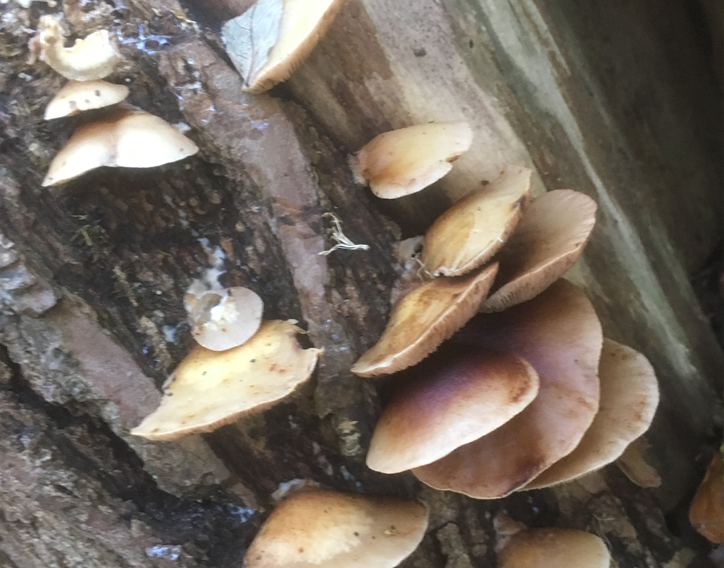 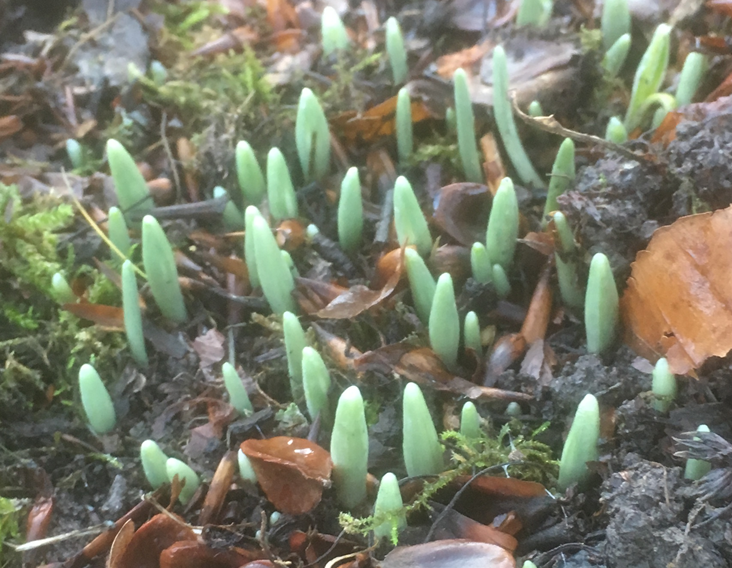 This month Woodbrooke’s garden was home to fungi which take up the opportunity to digest decaying organic matter. Surprisingly however it seemed some bulbs were already showing. Their tips were poking through the soil under the beech tree in the front car park. A dramatically coloured gelatinous fungus that was also in the front car park was the yellow brain (Tremella mesenterica). This was growing on a dead twig under the beech tree. It is supposedly very common and widespread but I haven’t seen it often and am thrilled by its striking colour which helps to make a guess at identification. The Collins Guide to British Mushrooms and Toadstools suggests it can form a floppy cluster up to 8cm across. The Woodbrooke blobs seemed quite a bit smaller. The ground by the beech tree was well endowed with fungi but the grey and brown ones were much more difficult to identify even if the brown ones formed attractive stars when older. 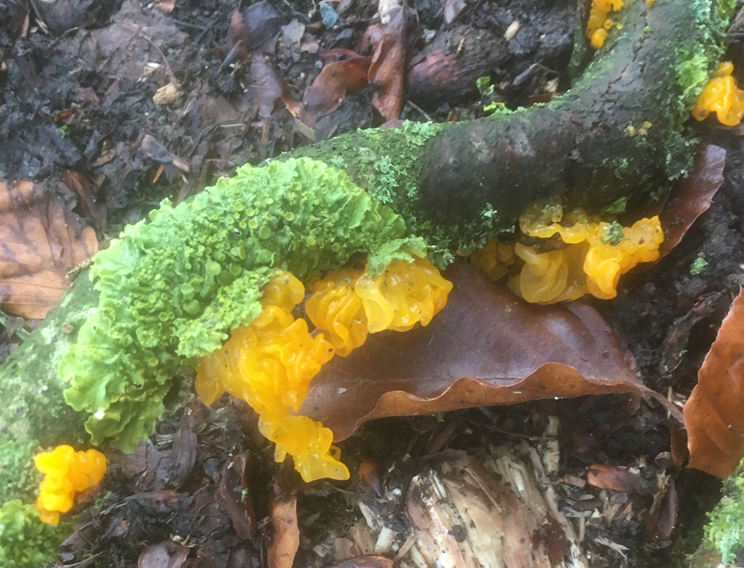 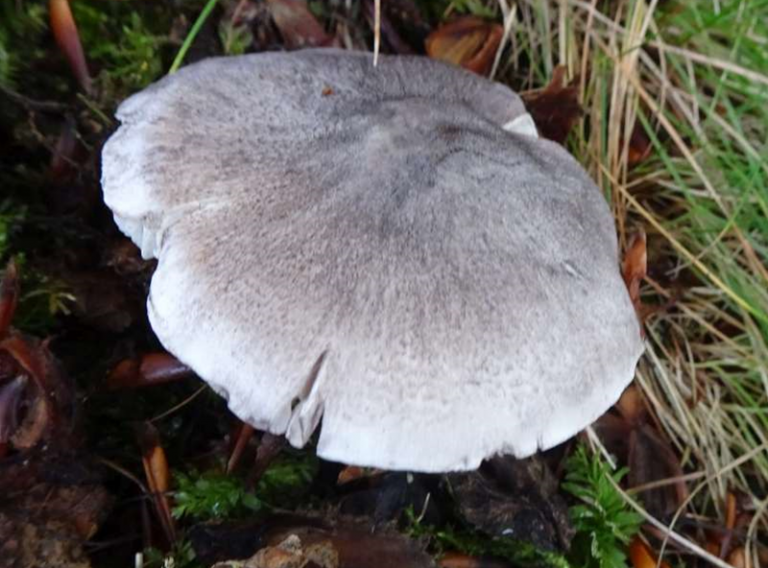 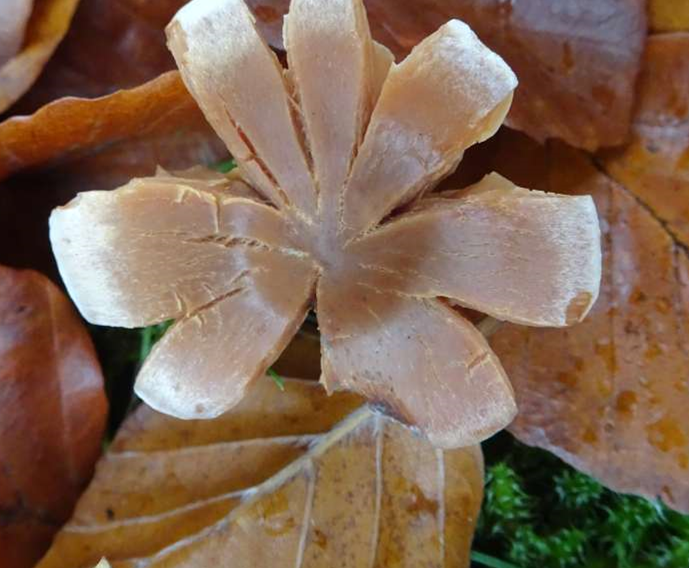 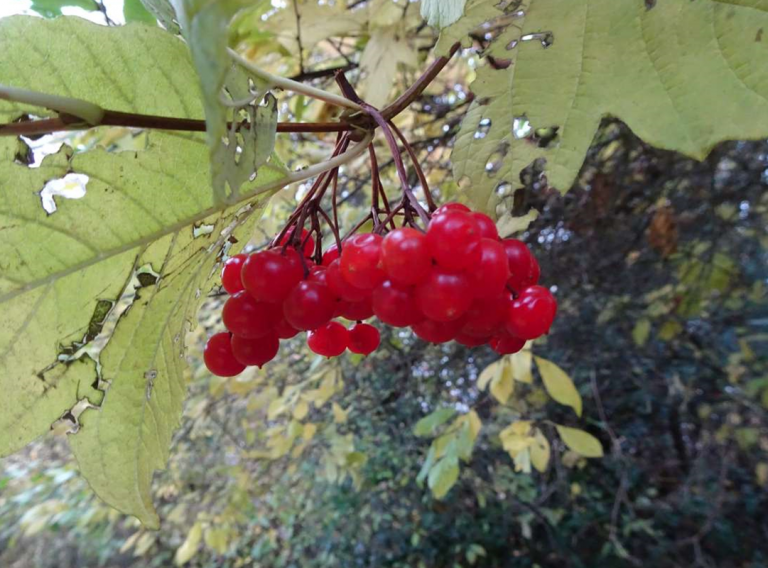 In November, the entrance to Woodbrooke was certainly not devoid of colour. The clusters of red berries of the guelder rose (Viburnum opulus) bushes hang in clumps by the path from the car park down to the lawns and woodland. The fruit is said to be edible and can be used to make jelly. It is however rather acidic to taste and a possible cause of diarrhoea and vomiting. The guelder name originates from a Dutch province and, although it is widely planted, it is also native in the UK. 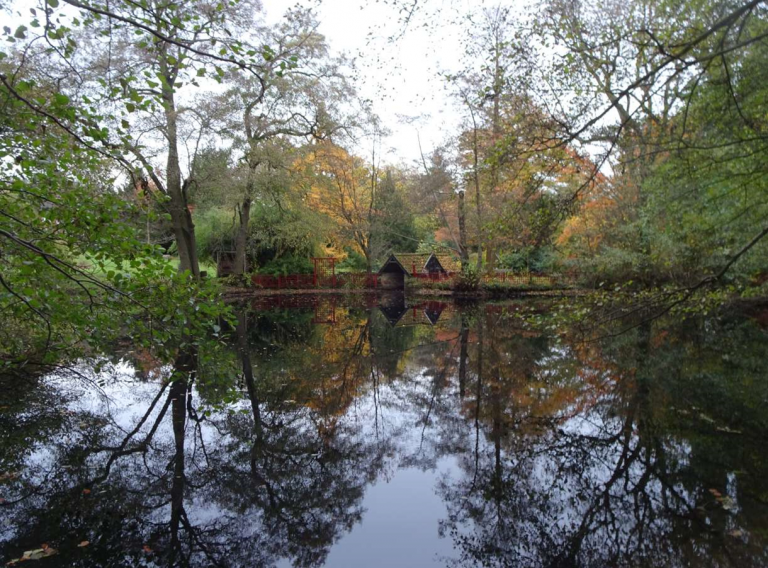 Woodbrooke’s lake appears to be recovering from the low water levels of the summer and the water looks clearer again. It offers a beautiful mirror to present reflections as you look along its length from the dam to the boathouse and the Chinese Garden. I visited at the beginning of the month (9th November) when it was largely cloudy and about 100C. There was still quite a bit of autumn colouring such as the yellows and browns of the beech leaves. 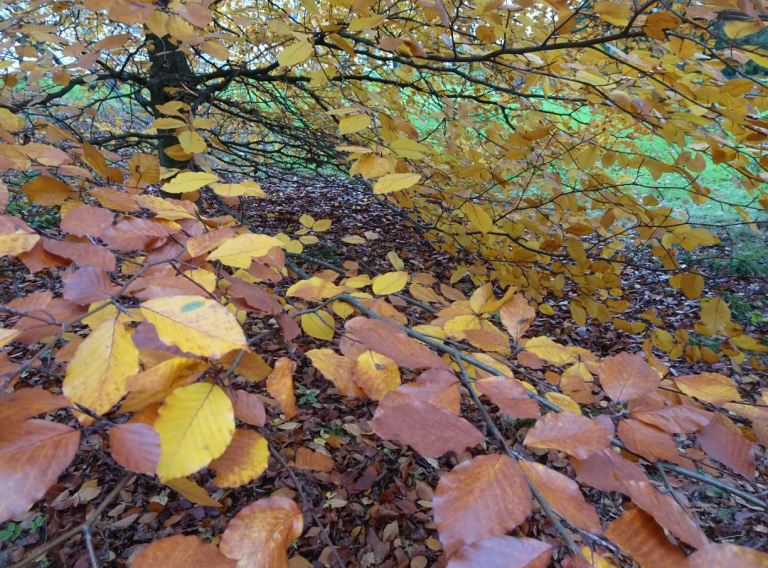 My second November visit was on the 30th. It was 80C and sunny after strong winds and rain. Most of the deciduous leaves were down but the holly berries and the green shiny leaves survived. November is also a time for sloe berries. At the beginning of the month they are likely to be plump and ready for pricking to add a delicious taste to gin. Sloe gin, made in October/early November, will be ready for Christmas so, for those who like a tipple, the sloes can be harvested and tipped into gin together with sugar. My recipe suggests an equal volume of sloes, gin and sugar. If alcohol is to be avoided, the sloes can be used to make jellies and jams. Some recipes suggest straining the fruits which presumably minimises the risk of tart flesh surviving the cooking.

I visited Woodbrooke on 13th December and 31st December 2018. December seems to be the quietest month in the garden. Things appear to be resting at the end of the old year and not visibly very active in preparation for the new one and Spring. On the 13th December, it was bright afternoon but still frosty in places. On 31st December it was about 80C, a gloomy grey afternoon, following a misly morning. December wasn’t so much a time for looking for new species but for seeing more familiar ones without the confusing cloak of profuse growth all around. The bark of trees stood out as did the trees themselves. Humble ferns were more obvious without the competition for appreciative viewing. 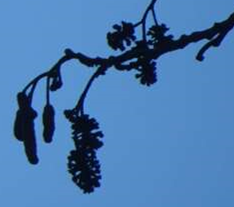 Some bulbs are just beginning to show a flower at the end of the month. The snowdrop bulbs at the Woodbrooke entrance have a hint of white. I think the plant to the right is cherry laurel and a few flowers are just starting.  More typical of the British trees are the hazel catkins and the beech nuts. By the side of Woodbrooke’s lake, a yew tree and an ash tree intertwine. The yew is evergreen and is showing some new growth. The ash has no leaves but it can be identified by the seeds (keys) that can be seen on the high branches. The typical black buds can’t be seen easily on this particular tree. 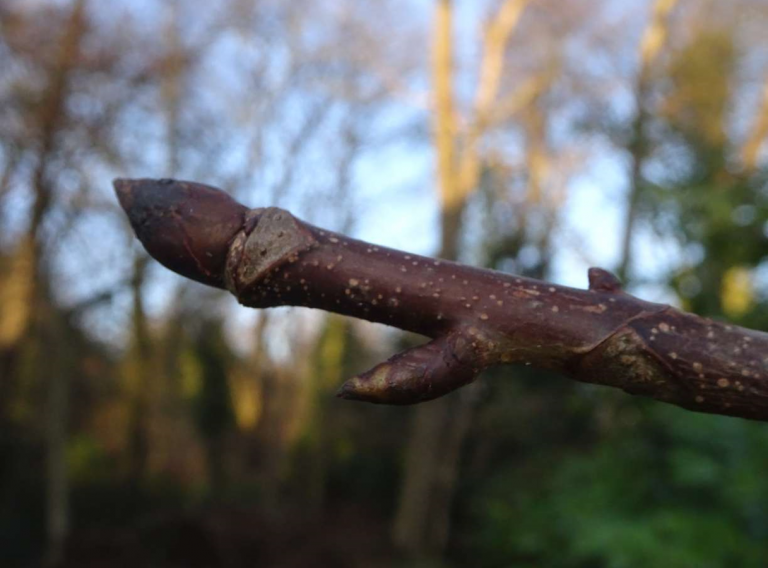 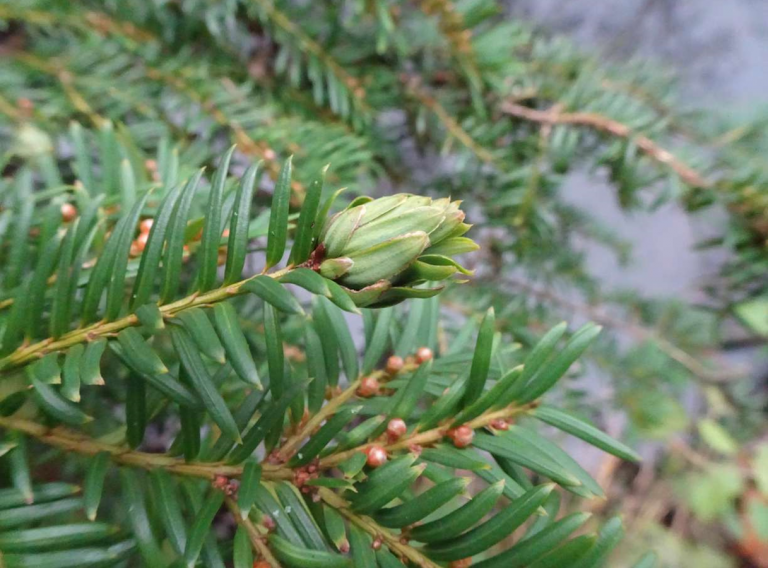 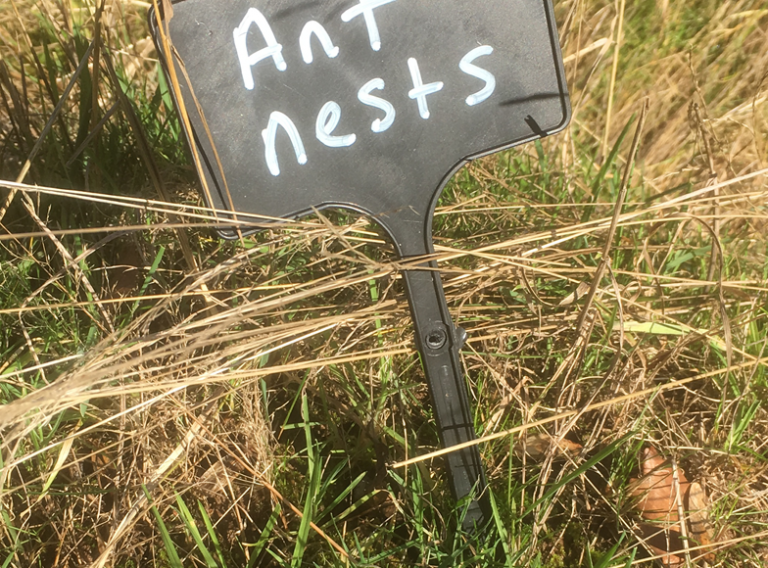 January is inclined to be cold and bleak. Sensibly the Woodbrooke ants are tucked up in nests. (Helpfully labelled on the grass bank at the north of the site by the row of oak trees). Less determined to keep warm are the birds. A nuthatch is visible on a leafless branch in the Chinese Garden. 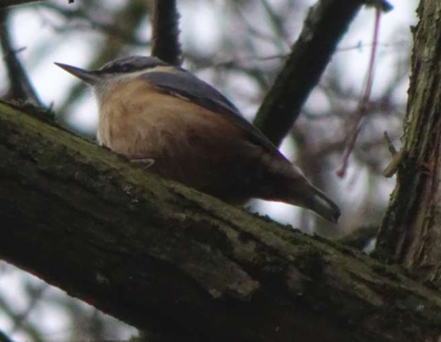 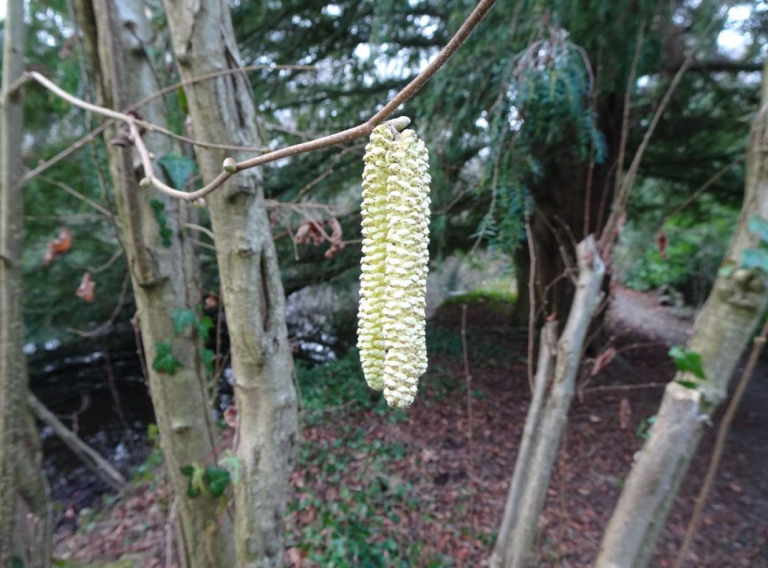 January sees some flowering effort. The male flowers of the hazel are abundant as prominent catkins. The tiny red flowers on the same twigs are very difficult to find (and photograph!) These female flowers are very retiring but January is a good month for diligent searching. 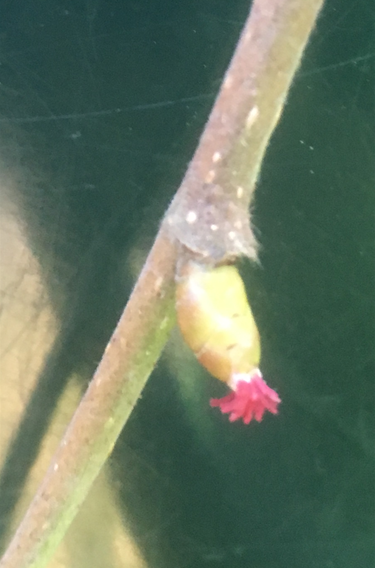 The bark of trees is good for identification in winter. The sequoia is deeply channelled and soft. A silver birch has very recognisable bark. I recently attended a tree identification course and learned that downy birch is similar but careful observation can reveal soft hairs on the twigs.  The sequoia at Woodbrooke has a label – Sequoia sempervirens to convince the uncertain. The turkey oak relies on hairy acorn cups for identification. Remember the Turk’s beard!

The birch stump by the volleyball court looks like a downy birch (Betula pubescens). The live twigs coming out of the stump seem to be softly hairy. A visit on 28th January 2019 was just warm enough (40C) to spend time turning binoculars upside down to look at the tiny hairs as well as to sit in the wooden shelter by the lake. 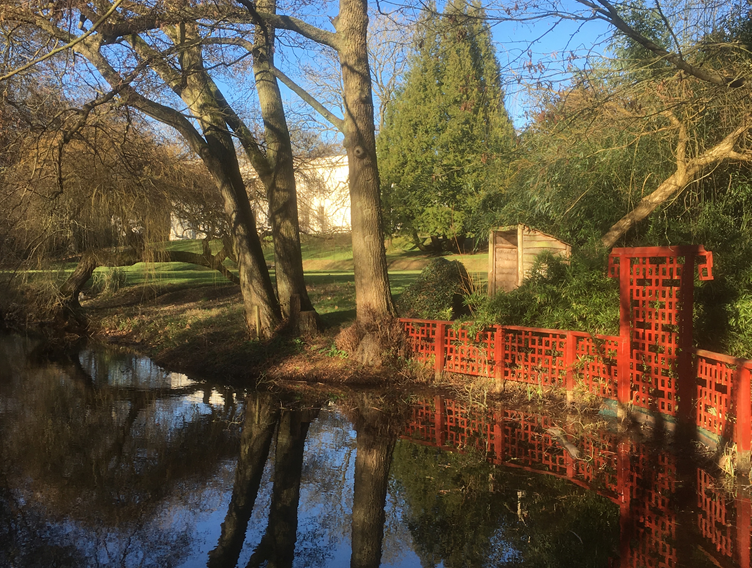 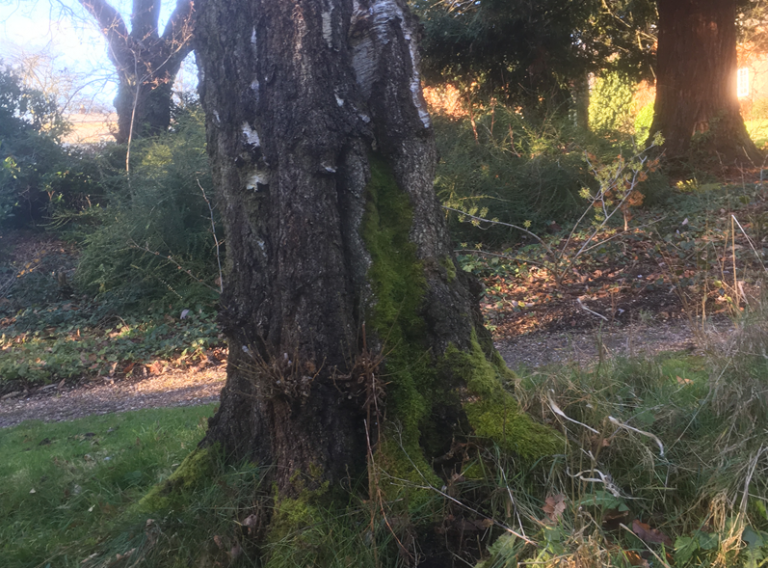 A cloudy day earlier in the month (14th January)  is brightened by a welcoming committee of snowdrops at Woodbrooke’s entrance. They have come on apace from the tight buds at the end of last month.

Woodbrooke is delighted to announce Helen Minnis as the 2022 Swarthmore Lecturer. Helen will speak from her experience as a scientist and a Quaker, addressing issues of white privilege within…