Emilia Fogelklou (1878-1972) was a Swedish mystic, theologian, psychologist of religion, educator, writer, peace worker and Quaker. She was the inspiration for a 6-week online retreat, offered by Woodbrooke in February of 2018. In this post, the retreat leader, Julia Ryberg, explains her life and work. 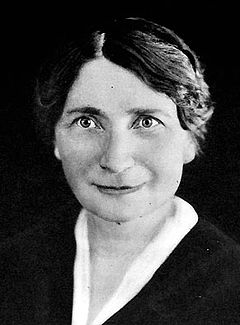 Emilia Fogelklou was the first Swedish woman to earn a degree in theology in 1909. Her account of a foundational spiritual opening in her early twenties has become an often cited inspirational text among Quakers and non-Quakers alike. Her writings include an autobiographical trilogy, psychological portraits of among others George Fox and James Nayler, religious education for children, studies on perception/form/radiance. Her rich life story, spanning two world wars, remains the subject of biographies and doctoral dissertations.

Emilia’s bright blue eyes seemed to penetrate the one she beheld. One Friend said she was ’too big for Sweden Yearly Meeting’, while she saw herself as ’the entirely most common person.’ She remains loved and ’owned’ by Quakers and non-Quakers who have never met her. She speaks to us still.

Julia Ryberg is an American-born Quaker living in Sweden. She works for Friends in Sweden and more widely in Europe in ministry and outreach. In September, she will run a six week online retreat, Living the Heart of Christianity, based on the work of Marcus J. Borg.