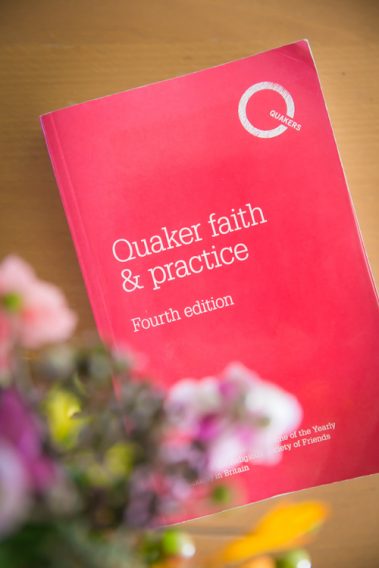 In British Quaker tradition, the community has a book of discipline which includes guidance for life, guidance for running a Quaker meeting, and extracts from earlier generations. It began as a book of extracts which collected minutes and epistles – the communal wisdom recording in words agreed by Quaker groups. Later, it was published as two or even three volumes, each dealing with different aspects of Quaker life: broadly, rules about how to run things were split up from sections of anthology which collected accounts of experience. Some bits, especially rules which have legal implications, get changed regularly, and the whole thing has been overhauled roughly once a generation. It’s the big overhaul which is known as ‘a revision’ – in between revisions, we sometimes print different versions of the book which are called ‘editions’.

At the moment, Quakers in Britain have a book of discipline called Quaker faith & practice. It’s one big, red book – also published as a website, at http://qfp.quaker.org.uk/ . It was approved by the Yearly Meeting in 1994, following a big revision process in which the ‘anthology’ and spiritual parts were almost completely rewritten, while the ‘church government’ or procedural sections were largely untouched.

Most of it hasn’t changed since then, although some chapters on procedures  have required significant rewriting. There have been changes prompted by the legal situation of charities, such as the need to have trustees; internal changes, such as the move from ‘monthly meetings’ to ‘area meetings’ as our key structure; and changes where Quaker positions and political moves interacted, such as the complex series of changes as we brought in same-sex marriage. Some of these changes, big and small, are brought to the Yearly Meeting for approval almost every year. They go onto the website as soon as possible, and into print in a new edition when the stock of the old one runs out.

Reading Quaker faith & practice has been one of the biggest learning activities among Quakers in Britain over the past two years. Many groups and individuals all over the country joined in with a suggested calendar running from October 2015 to April 2017, and more are now trying a short version which gives highlights over four months. (See http://qfp.quaker.org.uk/reading/ for details of these calendars.) It has been really important because in order to see whether a big revision is needed, we as a community need to know what’s actually in the book at the moment.

As a member of the Revision Preparation Group, who suggested this process of reading, and a member of Woodbrooke’s teaching team, and a member of an ordinary meeting which runs a reading group for the project, I’ve been lucky enough to see this from several sides. The Revision Preparation Group started the whole thing because when we thought about what would help the yearly meeting as a community, it seemed obvious that getting to know the book better would help. We didn’t anticipate just how many meetings would take it up! Just about every area meeting, and the majority of local meetings, have had groups and individuals participating in some way.

For myself, reading it and hearing other people’s perspectives helps to make it clear why some changes might be needed. There are areas where our understanding, both spiritual and practical, has come a long way since 1994. For example, the section on sustainability, which is called “Unity of creation” seems rather thin after the 2011 commitment to become a low-carbon sustainable community. A lot of it is wordy, and sometimes the sections on ‘how to do things’ either assume you already have experience – of what actually happens when Quakers are making decisions, for example – or has ended up with oddities due to repeated editing. It’s not friendly to people with dyslexia or some other specific learning needs, it contains almost no pictures or diagrams, and the possibilities opened up by modern technology could create exciting opportunities to change this.

Many of these problems focus on the sections sometimes called ‘church government’ – the bits which detail how we run our organisation. In 1994, these were mostly left alone, so the text here often dates from the 1950s, except where something has happened and a small edit has been approved to fix it. One approach to a revision would be to begin with these bits. A revision committee could go back to the drawing board and explain what Quakers today actually need to know: what are the rules, what are just guidelines, why do we do it that way, and where can you go for more help? Some of the detail might be moved out into supplementary material which could be updated more easily, while the underlying principles could be brought out more clearly.

Another area where some readers struggle with Quaker faith & practice is the matter of how we talk about our spiritual experiences and how we think about God, the Light, the Spirit, the Divine, or whatever you call it. For some, Christian words and ideas are important, while for others they are optional, and for others uncomfortable. For some, it would be dishonest to talk about God as personal or an external reality, while for others it would be dishonest not to. In order to explore these issues in more detail, the Revision Preparation Group brought together a ‘Theology Think Tank’, who produced a book about their discussions. This book, God, Words and Us: Quakers in conversation about religious difference (edited by Helen Rowlands) is well worth reading if this area interests you.

In May, when Britain Yearly Meeting gathers to consider whether or not the time is right for a revision of the book of discipline, we should be ready. We’ll have read the book (and if you haven’t, it’s still not too late – begin now or come to a 45 minute catch up session on Friday afternoon!). We’ll have had a chance to think as best we can about what we know and believe (and if you haven’t, pick up God, Words and Us and/or ask your meeting for a study session about it). And once we’re there, the Spirit will be free to lead us.